Many teachers ask me about differentiated guided math lessons to meet the needs of individual students.

This discussion is an integral part of my teacher professional development workshop because this is one of the biggest transitions teachers will make.

In order to help teachers in this task of creating differentiated guided math lessons, I will walk you through several activities that have been used in classrooms.  This example covers the math standard addition to thousands and algebra.   This lesson also incorporates several math process skills.  This lesson can be adapted to Kindergarten and first grade by using part-part-whole mats, which are the beginning foundation of algebra and function charts! (See the bottom of this post for Pre-K to 1 grade ideas.)

3.AT.6: Create, extend, and give an appropriate rule for number patterns using multiplication within 1000.

4.AT.1: Solve real-world problems involving addition and subtraction of multi-digit whole numbers (e.g., by using drawings and equations with a symbol for the unknown number to represent the problem).

First these function tables were made and laminated for student use.  Make sure you have about three extra for your largest Guided Math Group.

Then the teacher worked with the lowest group.  She had a discussion about how this form is just like an addition equation.  The students asked questions because they didn’t understand how.

The teacher then asked the students what they thought the rule was.  Since she had set up their thinking about connecting to addition, students came to the idea that the adding part goes there. 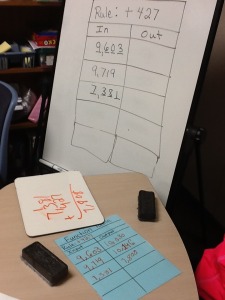 The teacher writes the input number and the rule on the Guided Math Board.

The students also had dry erase boards to do the computation work on.  Then they recorded their sums in the output column.

Because the teacher is using differentiated guided math lessons, the teacher adds more to the next board.  These students are ready for more.  Look at this Guided Math Board to see the differentiation. 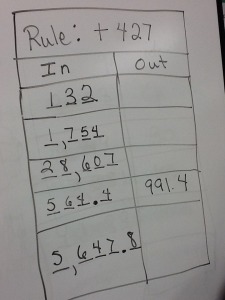 Notice the teacher add decimals and did one together with the students so they could understand the connection.  Then the students in this higher guided math group practices addition at their level.  Same basic lesson with extensions.

When the highest math group came for this lesson, a new challenge presented itself.  One student worked at a faster pace, so the teacher added a new rule at the top of the board for any students who finished early. 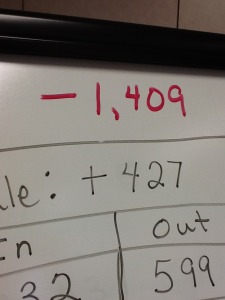 This way of differentiating can be done for any grade level and with any math concept lesson.  To do this, just think of the next math skill to be taught connected to the one you are teaching. I hope this helps you to see how differentiated guided math lessons can be planned for and used with your guided math groups. 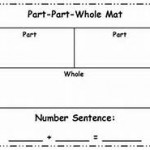 This part part whole mat can be used to teach addition and algebra in guided math groups.

The Kindergarten and First Grade version of this activity would be to use a part-part whole mat.

How about using this version in guided group stations after you have practice using the mat with students in guided math groups?  Fun!  This is the next step of taking the differentiated guided math lessons and adding an activity a few weeks later to your skills review station. 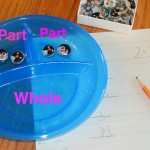 This part part whole plate can be added to Guided Math groups.